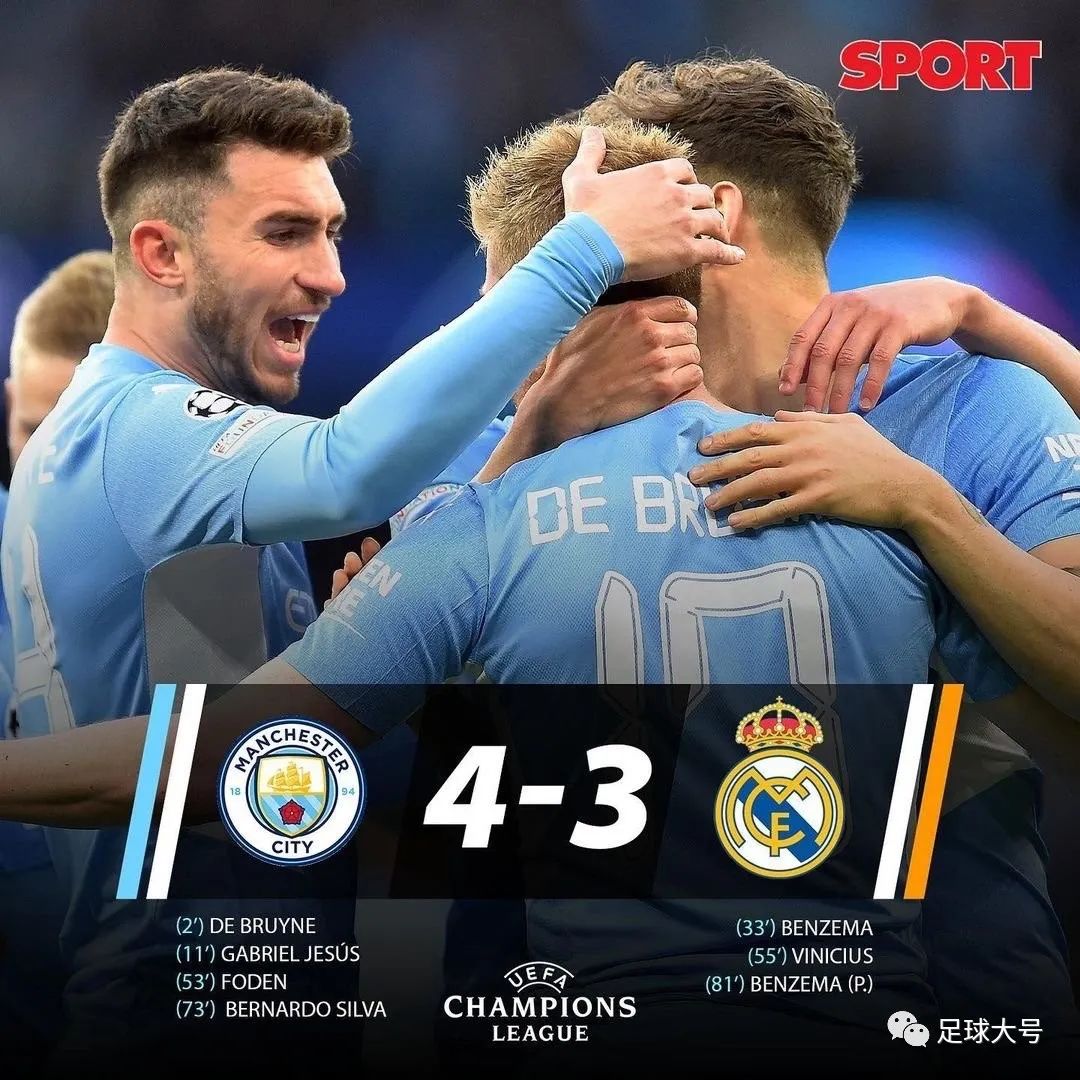 The two teams have faced each other in the last three times, and Manchester City have won all of them, including the 2019-20 season 1/8 finals, which both won 2-1 at home and away. Manchester City has also become the Premier League team with the most wins over Real Madrid in the Champions League.

In the history of the Champions League semifinals, there have been 7 goals in a single game twice before: Ajax 5-2 Bayern in April 1995, and Liverpool 5-2 Roma in April 2018.

Manchester City players may be a little lost. They created more chances in the game. Mahrez and Foden both missed goals that continued to expand their lead.

The British media “Daily Mail” lamented that Manchester City should have won 6-3 or 7-3, but “released” Real Madrid. “If Manchester City had seized the opportunity, the four goals could have turned into eight goals. Manchester City are the better team, but they failed to completely beat Real Madrid, leaving enough suspense for the second leg.”

In contrast, the significance of Real Madrid’s possession of Benzema is even more important. The Ballon d’Or candidate’s favorite scored two goals, raising the number of personal Champions League goals this season to 14 goals.

In the past 4 Champions League knockout games, Benzema has scored an astonishing 9 goals. Including a 3-1 Paris hat-trick at home and a 3-1 Chelsea hat-trick away. This year’s Golden Globes are likely to be decided.

This season, Benzema scored 41 goals for Real Madrid in 41 appearances, averaging 1 goal per game. This is the first time that Benzema has scored 40+ goals in a single season in his career. Counting the national team games, Benzema scored 46 goals in 48 games.

Witnessing Manchester City and Real Madrid playing offensive football, Italian Champions League commentator Ferry praised on the Mediaset program: “This is a game to advertise football. Guardiola and Ancelotti know how to instill football in their teams. Philosophy. Tonight was a fantastic night for the fans, but not just that.”

The German Champions League broadcast guest Mario Gomez also said: “It’s really incredible, I can only pay tribute with applause. When have you seen such a wonderful Champions League semi-final? Unbelievable, I am really too Happy to be here tonight.”

Guardiola said after the game: “It was one of the best nights of my life. Today both teams wanted to attack and had the ability to control the ball. Football is a wonderful spectacle, it can bring extreme emotions freed.”